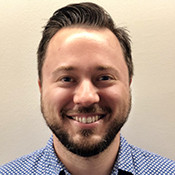 Ryan Newberry is in his second year at NYU Wagner, pursuing an MPA-PNP in the advocacy and political action track. He is especially interested in influencing policy and public opinion through communication, focusing on the finer points of activism, fundraising and behavioral science in both his studies and his work in nonprofits and consulting, which has included positions with Public Works Partners, MaleSurvivor and Save The Music Foundation.

Ryan loves traveling, especially to places where he can practice his Spanish, and watching his beloved Oklahoma Sooners play. He grew up in Waco, Texas, and lived in San Antonio and Austin before moving to the New York area with his wife, Kelsey. They live with their dog and two cats in South Orange, New Jersey.