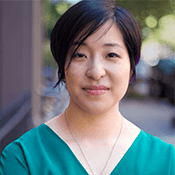 Aya Esther Hayashi is a Japanese American arts administrator, musicologist, and theatre artist, currently serving as the Development Director at People's Theatre Project. She moved to New York City to pursue her graduate studies in music at The Graduate Center at the City University of New York, where her doctoral research and writing focused on race/ethnic performance in musical theatre and the music created within science fiction/fantasy fan communities. Her essays and interviews are published by Routledge, Intellect/University of Chicago Press, and Transformative Works and Cultures. She has also presented talks at regional, national, and international academic conferences. She keeps her creativity active by producing intimate musical theatre productions through her company Okaeri Productions and by performing and directing with AfterWork Theater. B.Music with Honors, University of North Carolina; M.A. and Ph.D. in Music, The Graduate Center, City University of New York.