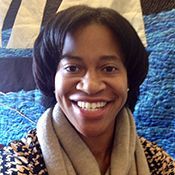 Alexis Smith was born and raised in Connecticut. She is currently the Executive Director of New Haven Legal Assistance Association (NHLAA), one of the oldest non-profit legal aid organizations in the country. NHLAA provides civil legal assistance to low-income individuals living in the Greater New Haven area. Prior to joining NHLAA Alexis was a staff attorney at Greater Hartford Legal Aid, where she practiced in the education and employment units. Alexis currently serves as co-chair for the Connecticut Bar Association’s (CBA) Task Force on Policing, as well as the CBA’s COVID-19 Task Force. Alexis was named to Connecticut Magazine’s 40 under 40 in 2015. She is also a recipient of awards from The West Haven Black Coalition, New Haven Probate Court, and Gateway Community College Foundation. Alexis has served as president of the George W. Crawford Black Bar Association and Secretary of the Connecticut Bar Association. She also serves on a number of local non-profit boards, including LEAP, ConnCAT, NeighborhoodMusic School, and New Alliance Foundation. She previously served on the Board of St. Thomas’s Day School. Alexis graduated from Hamden Hall in 1997, and went on to Duke University where she obtained her B.A. in History. Alexis earned her J.D. from the University of Wisconsin Law School. Alexis and her husband, Ken, live in Hamden with their children Carlton (age 8), Deborah (age 6), and Kayden (age 5).