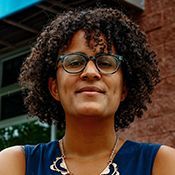 Morgan Monaco is the Executive Director of the Red Hook Initiative (RHI)—a youth and community development organization serving the over 6,500 residents of the Red Hook Houses, Brooklyn’s largest public housing complex. RHI believes that the social change to overcome systemic inequities begins with empowered youth and works in partnership with adults to create change from within. Morgan has over 13 years of government experience at the intersection of environmental sustainability and social justice. Prior to joining RHI, she served as the Deputy Director at the Mayor’s Office of Operations, the City’s performance measurement and management office. At Operations, she helped to ensure that City government remained accountable to its residents by increasing operational efficiency, and by managing broadreaching equity initiatives. She also helped to create OneNYC, which combines sustainability, equity and resiliency policy into one plan for NYC’s future. During her tenure at NYC Parks, she oversaw environmental sustainability initiatives and directed the MillionTreesNYC campaign to plant and care for one million new trees across the five boroughs. Morgan began her career on the Development team at StoryCorps, a national oral history project. Morgan has a Master’s in Public Administration and Non-Profit Management from NYU Wagner, as well as a B.A. in International Studies from Vassar College. She lives in Brooklyn with her husband, a fellow public servant, their son, an avid user of our city’s parks and playgrounds, and two cats, Raymour and Flannigan.