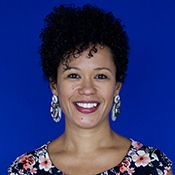 Natasha Trivers joined the multistate high-performing charter school network, Democracy Prep Public Schools, in 2011 as an assistant principal. In 2013, she became a principal and she continued to ascend in the organization, to superintendent in 2017 and finally to CEO in 2019. As Chief Executive Officer, she oversees the network’s schools in New York, New Jersey, Nevada, Texas and Louisiana. Natasha is deeply committed to race equity and strong academic and civics outcomes for students from historically disadvantaged communities. Under her leadership, students have completed college on a 6 year timeline at a high rate, 90% of NYC students are Advanced Regents diploma earners, and Democracy Prep has started an Advisory Board, which makes recommendations to the national board annually and is 70% Democracy Prep alumni, and 100% people of color.