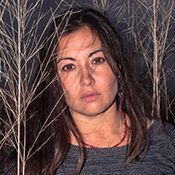 Sikowis Nobiss, MA, is Nehiyaw/Nahkawiyinîwiw of the George Gordon First Nation in Saskatchewan, Canada and grew up in Winnipeg, Manitoba, Canada. At 19 she began her life's work of uplifting Indigenous voices when she got her first job at the New Brunswick Aboriginal Peoples Council in Fredericton, Canada. In 2015, she founded Great Plains Action Society as a way to increase Indigenous solidarity in Iowa. It turned into a full-fledged organization during the fight against the Dakota Access Pipeline, which led her to start Little Creek Camp in February 2017. From August 2017 to September 2020, she worked for Seeding Sovereignty where she organized at a national level. As her heart is with her people and the prairies, Sikowis returned to Great Plains Action Society where she can work at a grassroots level and a fully Indigenous-led organization. Sikowis is also a speaker, writer, and artist. She believes that environmental and social justice work are inextricably linked and change will only happen when we dismantle corrupt colonial-capitalist systems and rebuild them with a decolonized worldview. She graduated from the University of Iowa in 2008 with a Masters Degree in Religious Studies (with a focus on Native American Religion and Culture) and a Graduate Minor in American Indian Native Studies. She fights for a better future for her two young children.