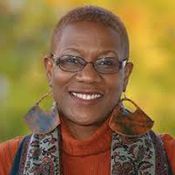 In 2019, Veronica cofounded the EcoWomanist Institute to create a different paradigm for women of African descent and to affirm their roles in healing this planet, our common home. The EcoWomanist Institute was created to provide resources to “heal the healer”. The overall mission and vision of the EcoWomanist Institute (EWI) offers programs, services and resources (virtually and physically) designed to enrich the wellbeing, (soulcare/selfcare) ecospirituality and environmental justice awareness among diverse African American and African-Diaspora women who represent every aspect of our community; the public, private, philanthropic, faith-based, and grassroots sectors. The mission of the EcoWomanist Institute is to increase the recognition and acknowledgement of the environmental leadership of African American women within Ecospirituality and Ecojustice narratives. Veronica joined the Faith in Place staff in August 2008 to engage in the much-needed work of linking/involving African American churches to the work of Faith in Place. However due to her creative programs and outreach strategies, she now works with houses of worship across Illinois that represent a cross-section of religious, cultural and racial diversity. Veronica is a sought-after speaker and workshop facilitator on   environmental issues, gender related issues, green economic opportunities, climate change impact of EJ communities and policy/ advocacy information. In addition, Veronica coordinates events, and develop programs and facilitates environmental justice initiatives and supports congregations that are new to the idea of living out their faith as good stewards of the environment. Veronica returned to her hometown of Chicago after working for twelve years in the Caribbean and Southern Africa Common Global Ministries which is the United Church of Christ and the Christian Disciples of Christ where she was responsible for developing projects and programs for underserved communities with a gender and racial equity focus. She received her B.A. in Religion and Women Studies from Vermont College of Norwich University and her MA degree in Gender and Development Studies from University of the West Indies. Veronica is serving a 7th term as an EJ Commissioner on the Illinois Environmental Justice Commission and a 2013 Toyota/Audubon Together Green Fellow. Veronica as a member of the Grand Victoria Foundation’s Vital Lands Illinois Working Group. In 2014 she was awarded an EECapacity Fellow of the North American Association of Environmental Educators. Most recently Veronica was appointed to serve on the City of Chicago’s Environmental Justice Taskforce with the newly elected Mayor Lori Lightfoot’s first 100 days in office initiative. Veronica is an adjunct professor at Garrett-Evangelical Theological Seminary in Evanston, IL and McCormick Theological Seminary in Chicago. She has had a lifelong interest in (and passion for) environmental, racial, social and gender justice issues. When not working on issues for her beloved community, Veronica practices Qigong, creates leather accessories, takes walks along the lakefront, journaling in her rocker on her front porch and enjoys star gazing through the trees in her backyard on her deck turned “evening room” at night.