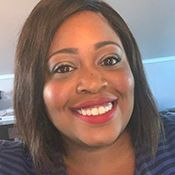 Nicole Johnson is currently the Acting Legal Director at the Safe Passage Project organization that provides free legal services to immigrant youth facing deportation. Prior to joining to Safe Passage Project in 2018, she was a Senior Staff Attorney with the Immigration Intervention Project of Sanctuary for Families at the Bronx Family Justice Center, representing victims of gender based violence in a variety of immigration matters including U Nonimmigrant visa Petitions and VAWA Self-Petitions before USCIS, Asylum applications both at the Asylum office and before the Immigration Court. Before joining Sanctuary for Families, she was an Associate attorney at Salmen Navarro Law. There she represented clients before the Immigration Court in a number of applications including Asylum, Cancellation of Removal, Provisional Waivers of Unlawful Presences, and other waivers of inadmissibility.She was born and raised in Southern California. She received her bachelor’s degree in Political Science from Mills College in Oakland, California. Her passion for travel and helping others led her to join the Peace Corps where she was a Youth Development Volunteer in Peru from 2006-2008. She returned from Peru with a dedication to international human rights and received her J.D from Rutgers School of Law-Newark in 2012. While in law school, Nicole was very committed to public interest work. She was a Kinoy-Stavis Public Interest Fellow, helping to lead the Rutgers Newark Community in Public Interest. She was also a Deborah T. Portiz Public Interest Law Fellow at Legal Services of New Jersey. She worked in the Constitutional Litigation Clinic and assisted in the organization of the newly formed Immigrants’ Rights Clinic at Rutgers. In her spare time, she enjoys cooking, baking, crafting and traveling.