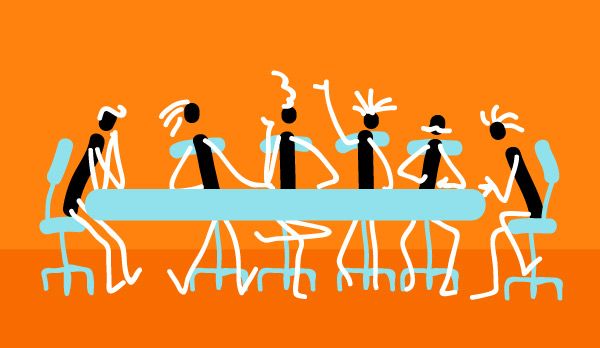 We’ve all seen them: Meetings where board members report on what they’ve done, agree to take on tasks, offer to support one another (“I’ll help you with that Suzy”). Meetings that crackle with deliberation, discussion of tactics towards a common goal, decisions, and commitments to action.

And we’ve all seen their opposite: Meetings that get lost in a swirl of details, tangents, anecdotes, pet peeves. Where “everyone has their say” and the debate goes round and round, nothing really resolves, and everyone leaves it behind till the next meeting when the discussion gets picked up right at the beginning all over again.

What makes the difference? There are a number of factors, but the most meaningful is a strong chair.

To chair a meeting well, is to understand the meeting as a pivot point. What comes before – preparation; and what occurs after – follow-up – are as important as the dialogue at the meeting itself. Otherwise it’s all talk.

Preparation begins with the agenda. What is the central purpose of the meeting? If it’s simply “to inform” – send board members a report via email. If it’s to discuss a course of action and make a decision on how to move forward – that’s a coherent meeting agenda.

Then, figure out the prep that’s needed. What do board members need to know to be able to make that decision? Can you ask individual board members to do some research before the meeting, and bring in the results to inform the board’s conversation? If there’s someone who’s really passionate about the issue, might they do a little extra prep to get the conversation rolling at second base?

Conversely, if there’s someone who’s likely to be upset by the issue, it’s worth doing a little pre-meeting counseling, so they’re not blindsided during the meeting. No-one reacts well to unpleasant surprises.

Keeping a meeting on track in the moment is also an art. Some chairs prepare two agendas: an external (for the board) version and an internal (for the chair and executive director) cheat sheet with hoped-for timings and key points.

The art of tact: “That’s so interesting Jane, but I want to pull the meeting back to the agenda item” can go a long way to keeping a meeting on course – and if you’re diplomatic enough, Jane will back down graciously and the rest of the group will breathe a sigh of relief that someone’s in charge of moving the group forward.

Don’t be afraid to call on people to speak – those with their hands up and those who aren’t as forward: “Luis, I’m wondering what you’re thinking about this?” It’s likely they’re mulling over the issues too, and are usually pleased to be recognized and asked for their opinion. And, doing so often brings the rest of the group back into realizing there are other people in the room besides the loudest voices, and to be respectful of the full range of opinions at the table.

And, don’t be afraid to call on people – with their hands up or not – to volunteer. Be brisk, be fair, but don’t be afraid to assume that everyone needs to take on some of the burden. Usually, they’ll be surprised that you’ve asked, but they won’t refuse to do their fair share. (But be able to pull back on the spot if they really can’t take on a task at this time – perhaps by suggesting another board member partner with them on the task.)

And finally – end the meeting with a recitation of follow-up commitments. Send out the notes, especially the next steps, within a couple of days. And then – yourself or ask staff to do so – send a full-group reminder of those commitments at the half-way point between this meeting and the next.

Meetings that hum are the result of people coming around the table with equal commitment and vigor. As chair, you can demand that – by demonstrating it yourself, and expecting it of your peers.