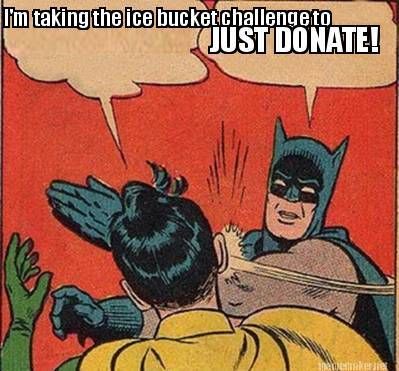 One million donors in, Ice Bucket Challenge versions 2.1 and 3.2 are hitting the web.

2.1 - Throwing ice cubes/water on your head and donating $100 to ALS plus $100 to Doctors Without Borders (or another medical charity) because others are suffering too.

3.2 – Throwing ice cubes/water on your head and skipping ALS because “they’ve already gotten way more than they know what to do with,” and simply giving to Doctors Without Borders (or another medical charity).

That combustible mixture of: i) social sharing; ii) participating in an “event” without a unifying place and time; and iii) the public practice of altruism.

None of which are unknown phenomena in the history of successful fundraising.

Social sharing: Just like a “thon,” certain fundraising strategies depend on public pressure and collective support. “Who else is giving?” is a classic prospect question – i.e., in whose company will I be? With every turn of social media, the #icebucketchallenge answered this question in a big way.

Events without a unifying place and time: One of the big drawbacks of organizing a special event is that if someone’s not free on a particular Thursday, 90% of the event’s benefits escape them. Sure, they can donate anyways, but the entire operation, its friendraising potential, the excitement of the crowd – that’s all going to waste for them. The Ice Bucket Challenge utilized the “expiration date” urgency of a classic special event, but without the necessity of showing up all in the same place at the same time.

Public Altruism: Proudly proclaiming oneself “Glad to Give” is a communal way of showcasing one’s values – or in any case, what someone holds as (and would like to be) their values. Either way, it serves the same purpose as public vows – it attests to someone’s beliefs in front of the world, and holds them to acting “as if” in the future.

It says: “I am a person who cares.” And: “I am (potentially) likely to act this way again in the future.”

The Ice Bucket Challenge. An opportunity for one million people to practice altruism, to try it out, see what it feels like.